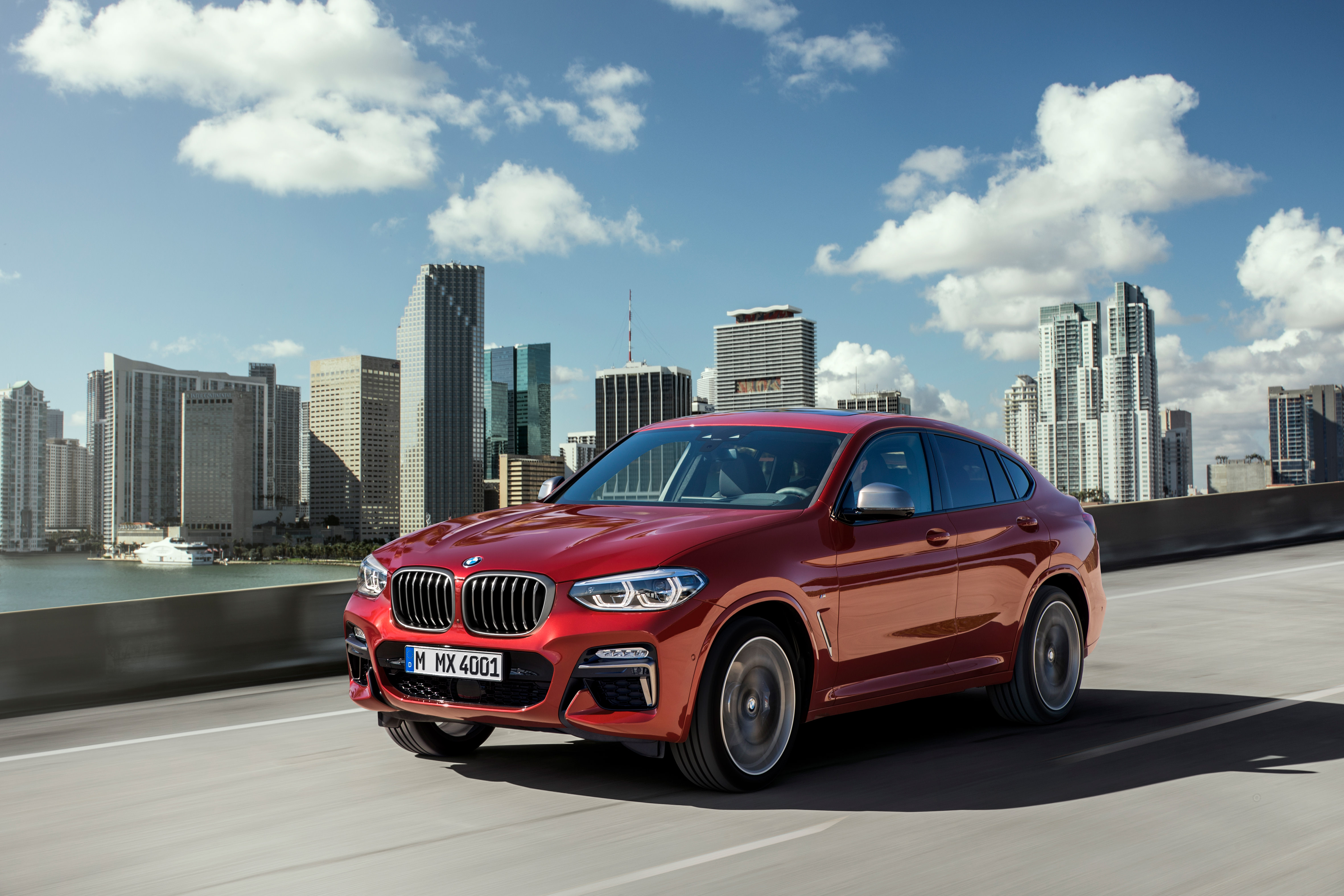 The 2019 BMW X4 M40i M Performance will make its North American debut at the 2018 New York International Auto Show taking place at the Jacob K. Javits Convention Center (located at 655 West 34th Street at 11th Avenue), in Manhattan. English- and German-speaking BMW representatives will be available for interviews on press days, Wednesday, March 28 and Thursday, March 29, at the BMW Stand.

Additional featured vehicles include the first-ever BMW X2 and all-new BMW i8 Coupe, both of which made their world debuts in Detroit earlier this year, as well as the BMW M5, BMW i8 Roadster, BMW i3s and BMW X3.

The BMW X2 made its world debut at the 2018 North American International Auto Show in Detroit. The first-ever BMW X2 has a distinctive exterior design that combines the fast-moving body language and low-slung proportions of a coupe with the robust construction of a BMW X model. The cutting-edge 2.0-liter BMW TwinPower Turbo 4-cylinder engine together with the 8-speed automatic transmission propel this emotional sports activity coupe from 0-60 mph in just 6.3 seconds, yielding 228 hp and a peak torque of 258 lb-ft. The 2018 BMW X2 is available in US showrooms starting at $38, 400 plus $995 Destination and Handling.

The 2019 BMW i8 Coupe is an enhanced hybrid 2+2 seater has increased power and range over its predecessor and has been the world’s best-selling hybrid sports car since 2014. Using optimized BMW eDrive technology, and with hybrid-specific all-wheel drive, combustion engine driving the rear wheels and the electric motor driving the front wheels, the BMW i8 Coupe achieves 369 hp (12 hp more than its predecessor), a peak torque of 184 lb-ft, and accelerates from 0-60 mph in just 4.2 seconds with a top speed of 155 mph. The lithium-ion battery, located centrally in the car’s underbody, and its cell capacity has been increased from 20 to 34 Ah and a gross energy capacity from 7.1 to 11.6 kilowatt hours. Also showcased alongside the all-new BMW i8 Coupe is the BMW i8 Roadster, which made its world debut at the Los Angeles Auto Show in November 2017. The BMW i8 Roadster takes the BMW i8’s combination of locally emission-free mobility and high-caliber performance and adds a top-down driving experience. The BMW i8 Roadster features a retractable, all-season fabric soft-top which can open and close in less than 16 seconds and while the vehicle is in motion at up to 31 mph. The two-seat BMW i8 Roadster stows its soft-top in the perpendicular position in the rear of the vehicle when opened and takes up very little space, maximizing storage capacity. The new BMW i8 Coupe starting at $147, 500 plus $995 Destination and Handling. And the new BMW i8 Roadster starts at $ 163, 300 plus $995 Destination and Handling.

The BMW i3s is a sportier and more powerful variant of the BMW i3, the best-selling compact battery-electric vehicle in the premium compact segment worldwide since it launched in 2014. The first ever BMW i3s provides an even sportier interpretation of silent mobility with zero emissions and features a high output 184 hp electric motor that generates peak torque of 199 lb-ft. The BMW i3s accelerates from 0-60 mph in 6.8 seconds and has a top speed of 100 mph. The BMW i3s uses a lithium-ion high-voltage battery developed by the BMW Group with a cell capacity of 94-ampere hours (Ah). Like the BMW i3, the BMW i3s applies the concept of sustainability throughout the interior and exterior of the vehicle, incorporating recycled plastics, renewable raw materials, natural fibers, and open-pored, unbleached eucalyptus wood in the design.

The BMW X3 is the third generation of the pioneering premium compact Sports Activity Vehicle. The dynamic handling qualities of the BMW X3 are linked to its ideal 50:50 weight distribution between the front and rear axles, its meticulously honed chassis, and xDrive, BMW’s intelligent all-wheel-drive system which debuted in 2003 in the first generation of the BMW X3. The BMW X3 uses a 2.0 liter TwinPower Turbo 4-cylinder inline gasoline engine and an 8-speed Steptronic Sport automatic transmission yielding 248 hp and a maximum torque of 258 lb-ft, accelerating from 0-60 in 6.0 seconds with a top speed of 130 mph. The BMW X3 xDrive30i is available in U.S. showrooms with a MSRP of $42,450 plus $995 Destination and Handling and the BMW X3 sDrive starts at $41, 00 plus $995 Destination and Handling.

The BMW M5 has been regarded as the quintessential high performance sports sedan since its initial iteration launched in 1984. The 2018 BMW M5 marks the debut of the first ever M-specific all-wheel drive system, M xDrive, which allows the BMW M5 to reach new heights of dynamic performance and delivers poise in all driving situations. Thanks to a 4.4-liter V8 engine featuring M TwinPower Turbo technology, the BMW M5 produces 600 hp and 553 lb-ft of peak torque, skyrocketing from 0 to 60 mph in just 3.2 seconds, making it the quickest and most agile to date. The 2018 BMW M5 will be available with a MSRP of $102,600 plus $995 Destination and Handling.
You must log in or register to reply here.
Share: Facebook Twitter Google+ Reddit Pinterest Tumblr WhatsApp Email Link